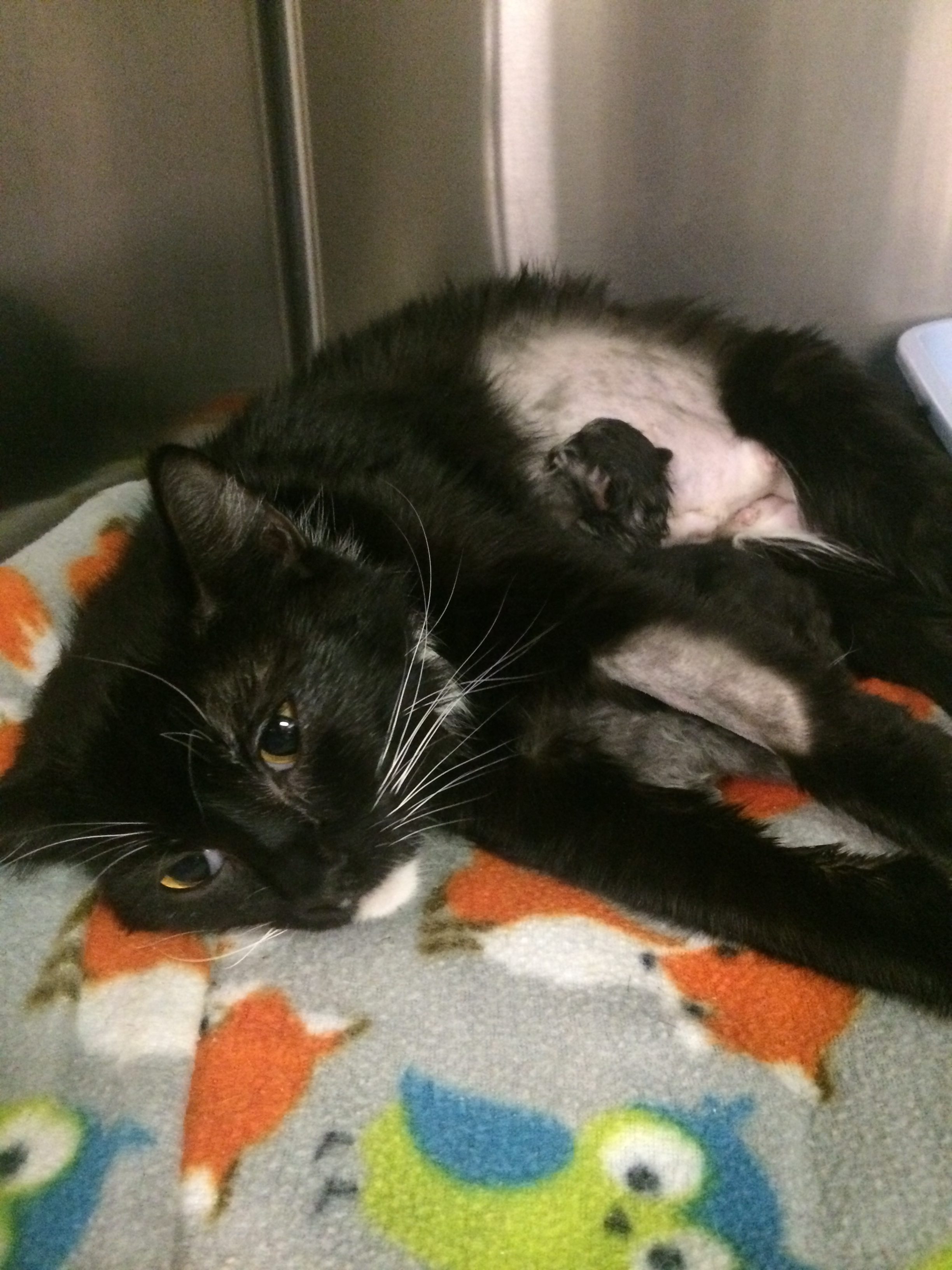 This is the story of Magic, a cat that Dr. Janeway did an emergency C-section on this week. She is a true testament to the importance of getting your animals spayed and neutered as well as the invaluable resources that Sammies Friends is able to provide to the Nevada County animal community.

On May 10, two kittens, one named Magic, and her brother Everett,  were turned into Sammie’s Friends. Their owners had became homeless and were living in their car.

Magic and Everett were about 8 months old, unvaccinated and unaltered. At intake it was quite obvious that Magic was pregnant. We saw her and confirmed pregnancy with an ultrasound.  The shelter staff decided she was too far along to abort the kittens and the decision was made to let her have them.  Due to her pregnancy, she wasn’t a candidate for vaccination. So she went to the shelter, unvaccinated. (Unvaccinated and unaltered cats make up about 80% of the cats that Sammies Friends processes.)

After a few days  Magic came down with an upper respiratory infection. This is a highly contagious disease that is spread quickly in shelter settings. Unvaccinated cats are extremely susceptible. Magic became very sick.  Her eyes were swollen shut and her nose was runny. She was hospitalized in our isolation ward on two separate occasions. She even stopped eating. We were all worried about her and wondered how the kittens inside of her were doing.

After her last hospitalization Magic had the good fortune of going home with one of Sammies Friends most devoted foster family’s who are especially good with small kittens. Magic had her own maternity wing and was being waited on hand and foot. 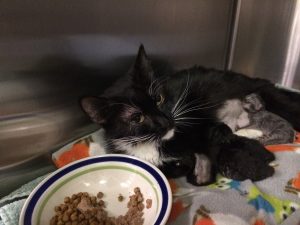 Magic is such a good mommy.

At 3 AM on Monday morning her water broke and by 2 PM she hadn’t had any kittens. Edy, her foster mom, phoned us and made an appointment for her to be seen. At 4PM Magic arrived at our hospital and Dr. Janeway ordered x-rays and an ultrasound. After seeing one large kitten stuck in the birth canal and verifying that the other kittens were alive, Dr. Janeway decided to take Magic to surgery for an emergency C-section. 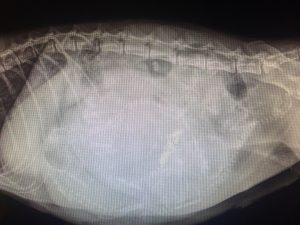 What a jumble of kittens!! Their spines look like zippers. How many do you count?

Monday was insane! Our appointments were booked solid, we had walk-ins and drop offs and a full schedule for our groomer. The phone was ringing off the hook. We were tired and weary.
But all that melted away when we heard there was going to be KITTENS!!

That right there is the magic of veterinary medicine. No matter how our day has gone, when it’s time to do work and save lives, all of our energy refocuses on saving that animal.  Check out the look on Molly’s face as she preps for kitten resuscitation! Priceless! 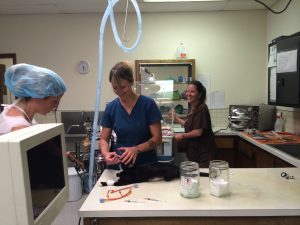 Caesarean sections are always so exciting.

This is how a C-section goes:  the momma is placed under general anesthesia and the veterinarian removes the kittens (or puppies) from the uterus, as they do this each kitten gets handed off to a staff member whose job it is to revive that little neonatal animal. 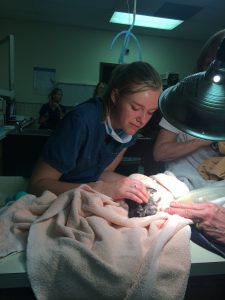 Brittany stimulates a kitten while it gets some Oxygen breaths under the warming light.

This involves suctioning the mouth and nose, rubbing them vigorously, keeping them warm, and encouraging them to breathe. This usually takes longer than you want because they are under the influence of the same drugs the mom has been on to keep her anesthetized. You should hear the cries that ring out when they take their first breathe!! It’s excitement and relief all rolled into one!! 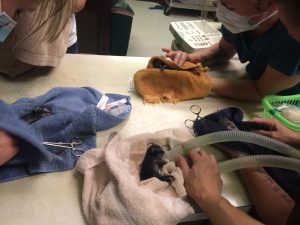 The resuscitation process involves warm towels, stimulation, and some oxygen.

All together Magic was pregnant with 5 kittens. Three of them survived. The kitten that was stuck in the birth canal was deceased when Dr. Janeway took him out, and one little black kitten AKA Big Black never fully revived. He was thin and dehydrated. They were born a little lean, probably the result of mom being so young and getting so sick while she was pregnant.  This is the tragedy associated with pet over population and not getting animals spayed and neutered. 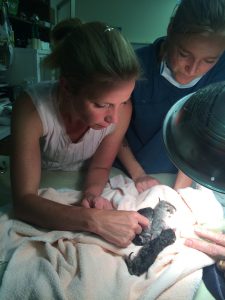 Dr. Janeway checks on the kittens after finishing her surgery on Magic. She did a great job! She is a great vet!

Magic came in for a recheck yesterday and she and the kittens are doing great. Their foster mom, Edy, tube fed the kittens every two hours and that really helped them get through that first 24 hours. Magic is a great mom. She lays on her back with her back leg up so the kittens can nurse. Her belly is shaved from surgery and that makes it easier for the kittens to find nipples. There’s a grey tabby, who was the first one to breathe, mew, and start wiggling around. He’s the hungriest kitten of them all! 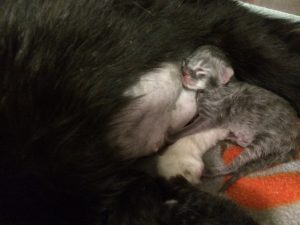 This little guy has no problem finding a nipple to nurse on.

From here on out we keep our fingers crossed that Magic’s Upper Respiratory Infection is resolved and that her kittens don’t get it. They will stay with Edy, the foster mom, until they are vaccinated and altered, then they will be ready for adoption. Magic, and her brother Everett are going to be available for adoption as a pair in about 8 weeks, once the kittens are weaned.

Magic relaxes and recovers from surgery as she snuggles with her kittens.

If you have any questions about getting your cat or dog spayed or neutered please call the hospital at 530-477-6863. We can also be reached through our email account at brightongreensvet@gmail.com and of course we have a Facebook page too!

Sammie’s Friends can be reached at 530-274-1955 if you are interested in adopting Magic and Everett or their kittens.

As always, thank you for reading this!