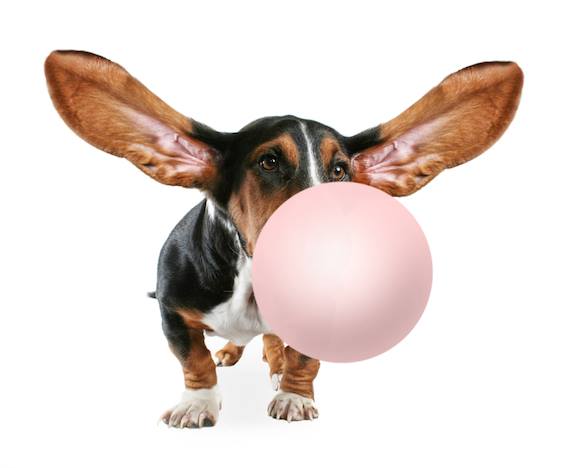 Did you know that March is Poison Prevention Month?

In recognition of that we are sharing Dr. Janeway’s most recent Paws & Claws article.

Hi Dr. Janeway,
My dog is a Lab that eats EVERYTHING! She recently ate a piece of my gum out of my purse, when I called the vet they asked me if the gum contained Xylitol. Luckily, it did not contain that ingredient, but I was hoping you could explain to me what Xylitol is, and what would happen if my dog did eat gum containing it?
Thank you,
Hungry Lab Owner

Great question! Xylitol is a sugar substitute found in gum (as you found out!) and also in some types of peanut butter and toothpaste. Even one piece of Xylitol containing gum can be deadly to a dog. It is currently unknown if Xylitol is toxic to cats, but better not feed it to the cats either until we know more. There are two potentially fatal effects of Xylitol ingestion in dogs: hypoglycemia (low blood sugar), and liver necrosis.

When humans ingest Xylitol it is absorbed slowly and has very little effect on our blood sugar or insulin levels. When dogs ingest Xylitol it has a different effect. After a dog eats a Xylitol containing product, it is rapidly absorbed into the blood stream and the pancreas mistakes it for real sugar. The pancreas responds by sending out insulin to remove glucose from the blood, resulting in hypoglycemia (low blood glucose). Hypoglycemia itself can be serious and fatal, potentially causing seizures and coma between 30 minutes-12 hours after ingestion. Dogs that are suspected of eating Xylitol containing products should be brought to a veterinarian immediately to induce vomiting in an attempt to remove the Xylitol containing substance from the stomach. The dog will also likely need to be hospitalized for monitoring and administration of IV fluids containing dextrose to prevent low blood sugar for at least 24 hours.

Xylitol ingestion can also cause liver necrosis in dogs. It is still unknown how this occurs, but signs of liver necrosis may develop between 8-12 hours after ingestion of Xylitol. It is suspected that liver necrosis results after higher doses of Xylitol have been consumed than with hypoglycemia. Some dogs treated aggressively may recover, although prognosis for survival after liver necrosis sets in is poor. If your pet is hospitalized after ingesting Xylitol containing products their liver enzymes and the blood clotting factors (which are made in the liver) will be monitored closely.

I hope this information has been helpful to you. If you ever suspect your pet has eaten a potentially toxic substance call the clinic ASAP. If we are closed you can call:
ASPCA Animal Poison Control Center at: (888) 426-4435, or
The Pet Poison Helpline at: (855) 764-7661